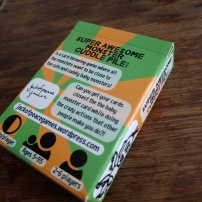 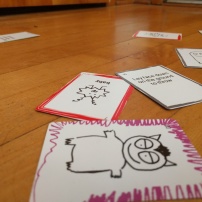 Super Awesome Monster Cuddle Pile is a card throwing game. Most people I’ve talked with who don’t regularly play games have a difficult time with that concept. Unless you’re pranking someone with 52 card pickup, most games don’t have a card throwing component.

However, this idea came about as I was thinking about the combination of Bocce played indoors and throwing cards as an interesting mechanic came to my mind. As I thought about it, the concept of monsters trying to cuddle each other (and comically jumping to do so) seemed to fit the concept of throwing cards in a haphazard kind of way.

I tend to write rules and playtest as quickly as possible and this game lends itself to being able to playtest because of the limited amount of rules that it has. We playtested it with some friends and the game was really enjoyable!

You can find the mechanics of the game on the game’s home page but essentially, you throw cards to try to get close to the first card that was thrown. When you throw a card that lands monster-side up, you have the opportunity to get points at the end of the round. When you throw a card that lands action-side up, the players after you have to do that action. I have a list of actions here that you can view, comment on, and comment new actions to do!

Early on in the process I decided to try to fully develop this game. Usually this isn’t really advisable until you do lots of playtesting but I really enjoyed Daniel Solis’ year-long challenge to himself to publish a game a month on Drive-thru-cards and, while I don’t have the experience that Solis did at that time, I very much like the idea of building and developing a library of games for Jack of Peace Games. This game hits a kind of niche which would be a great addition Jack of Peace Games.

I’m currently in the process of doing a lot of playtesting with this game and I’ll have an update here soon about the changes that I’ve made. Because, before artwork or any other further development happens, I want to make sure that I have a solid game which will be enjoyed by a lot of different groups.